You are here: Home / Gentle Parenting / Why I won’t make my children sit still…

I’ll admit that as a 21-year-old teacher I used the words ‘sit still’ more than I probably should have! I didn’t know it at the time.

I’d been trained to think that learning meant sitting still. I was taught to utilise several strategies to ‘encourage’ my early years kids to stop fidgeting.

Like most people, I’d been brainwashed into thinking that children who weren’t sat still or looking at me weren’t listening and therefore weren’t learning.

A lot of people still cringe at the sound of children playing enthusiastically or tut if a child isn’t able to sit calmly during a flight…they honestly do!

What I mean is the totally unrealistic expectation that we’re placing on kids. The do it or there’s something ‘,wrong with you.

Apparently her three-year old wouldn’t sit still for circle time at nursery and the staff had told her that it “wasn’t normal” and that he should be able to as all the younger kids could sit still.

That poor parent had basically been told that her child was abnormal. The poor child was probably made to feel abnormal.

It is so sad that we would rather diagnose a child as having ADHD or behavioural issues than change OUR behaviour or expectations.

So, here’s why I’m not forcing my children to sit still…

1. Kids don’t need to sit still in order to learn.

I get it, a class with 20+ pupils needs to be organised. You can’t really have that many children jumping around in a small space…it would be chaos.

However, kids need to move to learn as do adults (even if we’ve forgotten this).

What we were taught was less about optimising learning and more about maintaining order.

Children are going to class with bodies that are less prepared to learn than ever before. With sensory systems not quite working right, they are asked to sit and pay attention. Children naturally start fidgeting in order to get the movement their body so desperately needs and is not getting enough of to “turn their brain on.” What happens when the children start fidgeting? We ask them to sit still and pay attention; therefore, their brain goes back to “sleep.”

We need to allow movement and stop seeing it as a punishable offensive.

A child who likes to move does not automatically need to be labelled and medicated. Some kids just need a different approach and a more realistic expectation to live up to.

ADHD isn’t often diagnosed in preschoolers because of how normal it is for them to need to move. The problem is that when they get to school we suddenly move the goalposts. It’s now something we’ve decided that they’re ready for. In fact we’ve started ‘teaching’ these skills to our preschoolers in preparation for school.

My eldest has brilliant language skills (French and English), he follows stories and understands context.  He is bright and enthusiastic. BUT, I know that within a week of school he’d be upset at being told he was naughty.

However, much we’re told that play is the focus for young kids in school it just isn’t true. A lot of schools have just sprinkled some heavily structured play into their usual sit down and look at teacher routine.

How can they do anything but with low teacher to pupil ratios and poor resources.

We don’t need to teach children to sit still. They’ll get it at some point.

BUT, put them in a small classroom with 30 others and you pretty much have to force it…it just doesn’t work otherwise.

This is one of the reasons that our boys have never gone to preschool and aren’t in Primary School.

Take dinner time for example. We want mealtimes to be calm and enjoyable. We set the table and we eat at the table if we want to eat. Forcing the issue would just make dinner horribly unpleasant for everyone.

For a start we’re not actually designed to eat the way most of us do…three meals a day. Children definitely aren’t designed that way.

To me it’s not worth the negative feelings it would cause to insist that everyone sits and stays put for the entire meal.

They mostly sit…because they want to eat and join in. But, if they aren’t hungry then they can do something else quietly.

The poor mother that I mentioned earlier. The one who’s totally normal son was ‘abnormal’. She was given such horrendous advice that I was actually shocked that people felt that way.

She was advised to hold him down, give him time-out and smack him…all this for not sitting still for a story with his mum!

I googled it too…something along the lines of “teaching a toddler to sit still’.

Google Number One told parents to sit children on their lap. In silence. To hold them still. To not ‘entertain them’ by singing or tickling. To continue to do this until they learnt the art of sitting quietly. Apparently you then reward them with chocolate and trips to the park! #whowritesthiscrap

Kids need to roll down hills, take their shoes off, splash in muddy puddles and God forbid…even throw sand at the beach!

We prefer to focus our energy on talking to our boys about respect rather than insisting on a bunch of weird rules.

The truth is that most of us don’t move nearly enough.  The British Heart Foundation  says that around 20 million adults in the UK are physically inactive.

Offices are buying standing desks in an attempt to improve things yet we still think that kids should sit and listen.

We need to show positive attitudes towards moving, playing and having fun. I know adults who have no memories of playing as kids and oddly enough they now struggle to define what they enjoy now.

If we want our kids to be active then we need to encourage being active. And I don’t just mean organised sports.

I love to watch my boys play. It can be difficult for some parents to watch their children as they play. Sometimes those parents who struggle with allowing a particular type of play were actually punished or criticised for it as a child. Whether it was too noisy, boisterous or ‘dangerous’.

Sometimes it’s worth asking ourselves why we see something as unacceptable before we insist upon it.

Just because a 20 month old child can sit still for story-time doesn’t mean that they’ve learnt to sit successfully and will do so forever. When they reach 2 or 3 they may start to fidget and move more.

It’s not that they’ve unlearnt it. They just need to move more now.

They know what they’re bodies need.

I’m not a massive fan of absolute chaos i.e. kids birthday parties where the whole class is invited to eat cake and go jump on each other’s heads on a bouncy castle.

BUT, I do let my boys climb UP slides. 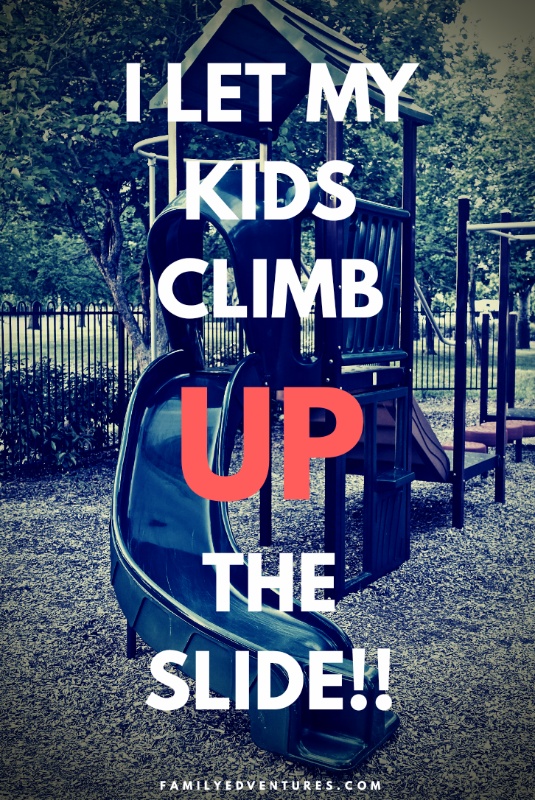 Big movements like jumping and climbing are actually essential for developing the muscles needed for fine motor skills like holding a pencil to write.

Many children are walking around with an underdeveloped vestibular (balance) system today–due to restricted movement. In order to develop a strong balance system, children need to move their body in all directions, for hours at a time balancedansbarefoot.com 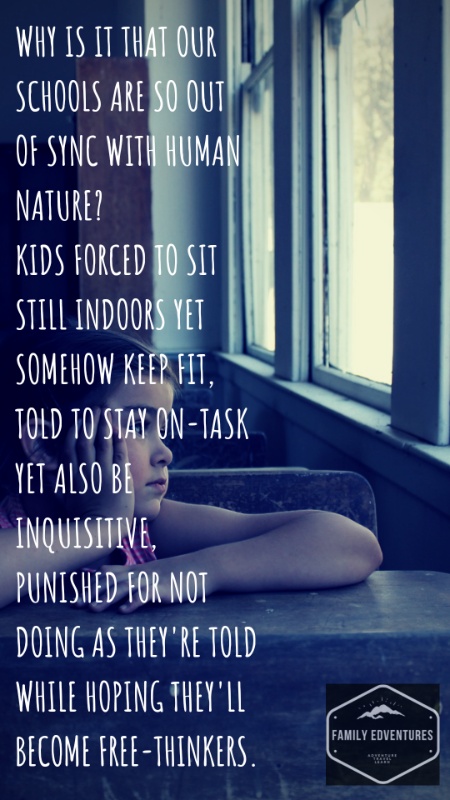 So next time someone makes you worry that your child is moving too much or playing too enthusiastically…remember it says more about them than your child. Don’t let someone else negatively affect the way you see yourself as a parent.

And…if all else fails then be this guy 😂 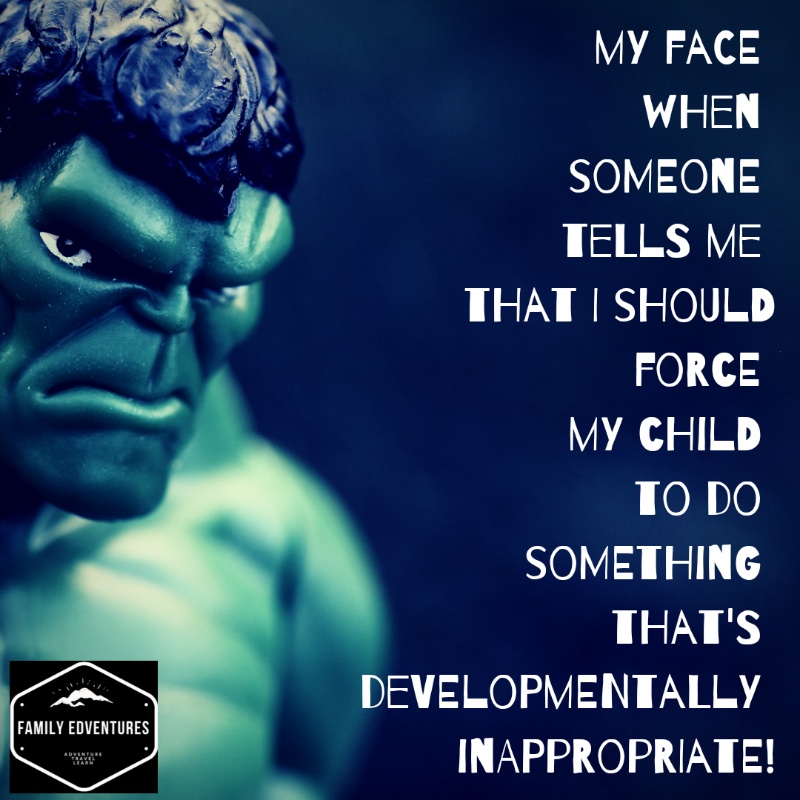