You are here: Home / Lifestyle / 3 “eco” things you probably do that are actually bad for our planet!

It feels great to do something that helps the environment doesn’t it?

Whether it’s saying no to a single-use straw or walking to the shops, we can at least feel that we’re doing something to help planet earth.

Because, most of us care about the state of our oceans, the destruction of our rainforests and our polluted rivers.

Most of us want to do something to help to put things right again.

If I’m being totally honest I’m actually pretty terrified about what life is going to look like for our children and grand-children. What kind of a world we’re going to be leaving them.

Which is why it feels like such a kick in the teeth when we try to do something “eco” but later find out that we got it very wrong.

Being environmentally conscious is a minefield!

I can take the odd looks that we get when we bring a container from home to our local take-away but what really pees me right off is being misled.

By that I mean, being made to think that we’re doing good when in fact our environment is actually worse off because of our well-meaning decision.

OK, OK, I know that we’re capable of researching each and every item before we purchase but sometimes there just aren’t enough hours in the day and other times we’re foolishly blinded by a cute character or an emotional piece of music.

Sometimes we foolishly trust companies when they tell us that their product is “green”, “eco” or “sustainable”.

Here are some examples of when the labels may sell products to guilt-free customers but don’t necessarily help the cause in the way that they expect it to.

Palm Oil…is it really that bad?!

You’ve probably heard about how rainforests are being torched recklessly and human rights violated to make room for growing oil palms. This not only releases CO2 into our atmosphere but it also destroys the habitats of many animals like this little guy…

So, palm oil is evil and we should all shop at Iceland because they’ve banned it…right?!

Unfortunately, it’s not that simple.

Is it ever that simple!?

There is huge demand for vegetable oils, they are added to so many of the products that we use…animal feed, make up, noodles, cakes, ice cream and biofuel.

The fact is that palm oil is the most efficient oil that we can produce.

If people start boycotting palm oil then producers will just grow a less efficient type of oil, that uses even more land to produce!

That is the opposite of what we want to happen. 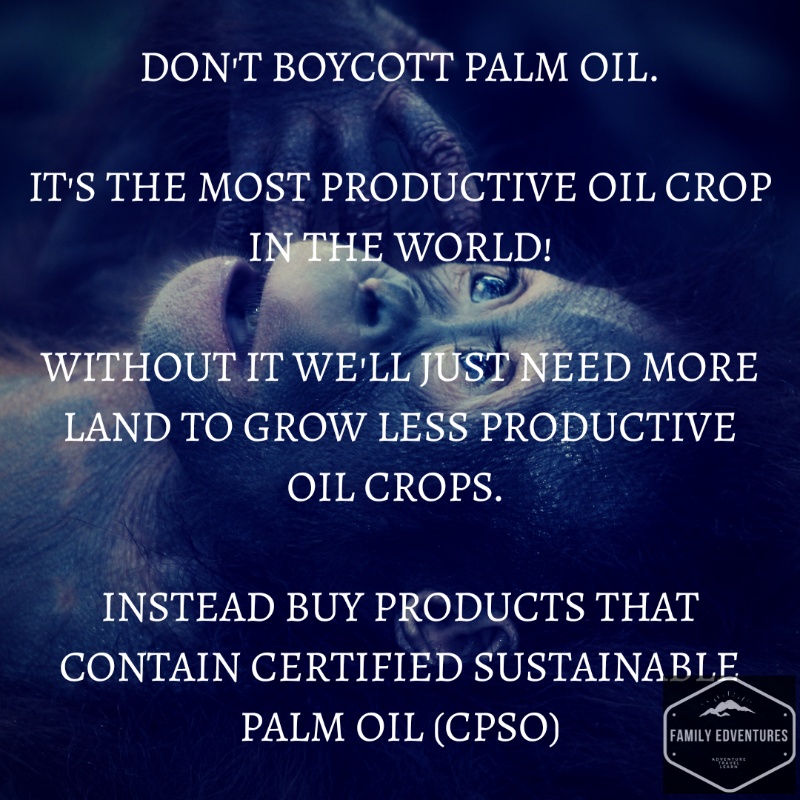 The Sumatran Orangutan Society do not support boycotting palm oil:

We do not believe that boycotting palm oil is the solution. It is the most productive oil crop in the world, so much more land would need to be sacrificed if companies switched to using an alternative.

So, what’s the answer then!?

Animal feed contains a lot of palm oil so reducing amount of meat in our diet can also help.

However, it’s not the oil palms that are the problem…unsurprisingly it’s us humans! It’s what we chop down and burn in order to make as much money as possible.

The most important thing that we can do is to buy products that contain Certified Sustainable Palm Oil, or CSPO.

This means that the palm oil has been certified according to a set of standards. These standards mean that operations are free from deforestation, free from the destruction of peatlands and free from the abuse of human rights.

So, instead of avoiding palm oil buy products that have CSPO approval.

In July of this year (2018) Hawaii became the first state in America to ban the sale of sunscreens that contain octinoxate and oxybenzone. 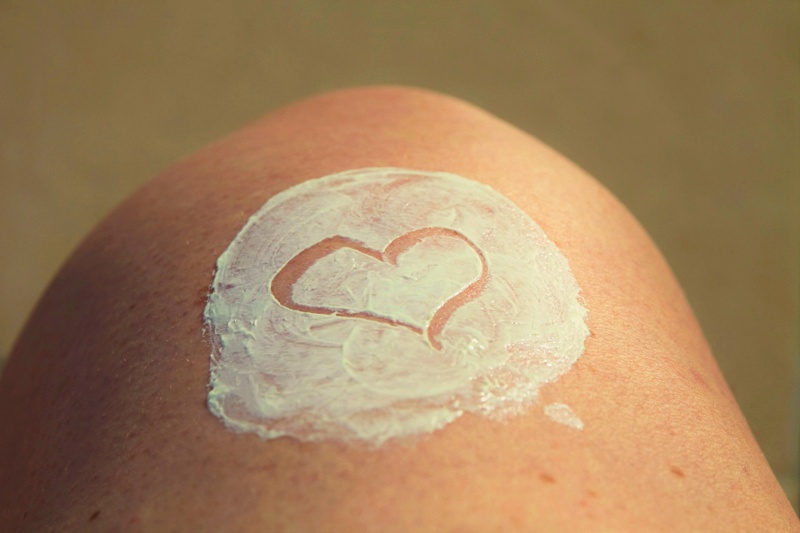 Hawaii’s Governor told the press that…

This bill is a small first step in Hawaii to really caring about our corals and our reefs in a way that really no one else anywhere in the world has done.

I’ve written before about how we are harming the ocean with the 14,000 tons of sunscreen that ends up in our oceans!

These chemicals, that end up in the ocean via our sewers or from our bodies when we swim are destroying some of our most beloved coral reefs are also toxic to algae, sea urchins, fish and mammals.

It can result in gender shifts in fish, in which male fish take on female attributes, while females have reduced egg production and embryo hatchings. In mammals it has been demonstrated to be a potential mutagen and to exhibit procarcinogenic activity. Studies in both mice and rats showed that exposure to oxybenzone increases liver and kidney weights, reduces immunity, increases uterine weights in juveniles and reduces fertility. In recent studies, human couples whose urine contained higher concentrations of benzophenones had a harder time getting pregnant, while men with higher concentrations had higher levels of diseased sperm. Both dolphin and human mothers can transfer oxybenzone to their infants via breastmilk.Craig Downs, PhD – Marine Safe 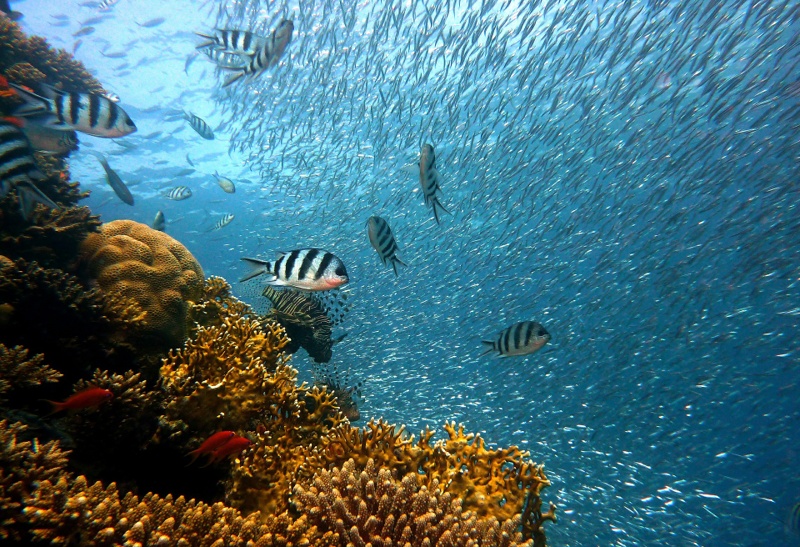 So, you can buy “reef-safe” sunscreen and relax in the knowledge that you’re not contaminating the ocean…right!?

Consumer Reports warns us that

The federal government requires sunscreen claims to be “truthful and not misleading,” but the term “reef safe” doesn’t have an agreed-upon definition, and therefore isn’t strictly regulated by government.

So all reef-safe sunscreens are not created equal…there’s a surprise!

What should we do then!?

Firstly , buy a reef-safe sunscreen that actually holds up to its claims…like this one by Badger…

Most importantly, safely reduce the amount of sunscreen that you need by wearing a UV tops like these ones…

Applying sunscreen to just the neck, face, feet and backs of hands can reduce the amount of sunscreen in the water by 90%!

How many reusable bags do you have in your house or car?

How many cotton totes have you acquired but never really used?

How many times do you think you use them before they break or end up as a rubbish bag?

Reusable cotton bags and plastic bags for life (that are only used once as the edge of the cereal packet usually pierces the side by the time you get home!) need to be used hundreds if not thousands of times to be more environmentally friendly. 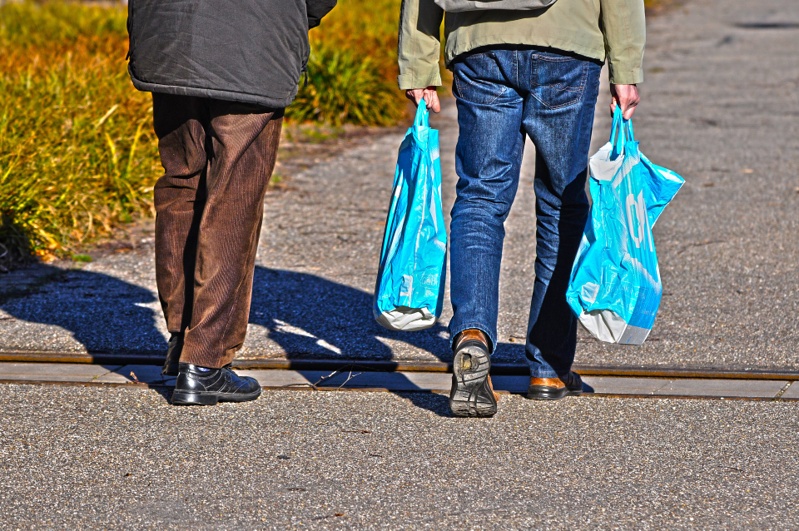 This recent report doesn’t take into account the massive issue of plastic waste ending up in our oceans but it’s definitely worth taking note of the full picture.

Use them, for years if possible.

Repair them if they break.

Cut the fabric into squares and use them as cleaning rags when they’ll carry no more.

Understanding the complexity of the issues is key to people being able to affect positive change.

Please share these messages as widely as you can.