You are here: Home / Travel and Fun / Family Travel Tips / The Unexpected Advantages of Being in Another Country With Kids!

OK, I’ll admit I was slightly concered about travelling with our toddlers!

Taking our three year old home-bod away from his toys, bedroom and extended family was going to be a nightmare…or so I thought!

Nobody Understands Your Kids

Where we are currently in rural Burgundy, most people speak only French…thankfully!

OK, this means I’m struggling  a little to communicate but it also means that no-one can understand the embarrassing things my toddler says…daily!

No-one batted an eyelid when my three year old shouted “mummy look at those little boobies! I like your big boobies” at the top of his voice in Super U last week. (For some reason he’s decided that bras are called boobies!)

There have been several other examples that would have made me blush in an English speaking country!

In France, he can talk freely about wee and poo and boobies and willies and all those other things that little kids love to talk about just as the room goes quiet.

I think we’ll stay here until he grows out of it!

They are so darn cute talking another language!

Hearing your child start to talk for the first time is pretty amazing but hearing them get a little accent and practicing new words is just adorable!

Our fussy eater is thriving!

There’s something about breaking a routine.. a habit…that has helped our son to try new foods!

I’m pretty sure he would still refuse beetroot and leave his tomato untouched but we have added a good few things to his diet!

I hate to say it but sometimes I find it a little…well…boring…being a full-time mum!

Doing something different is a great way to feel less bored!

For us this has meant spending the best part of a year travelling in France!

To a non-parent this will sound totally lame but I swear a different park, playground, ice cream shop…even grocery store…can make life a little more interesting! 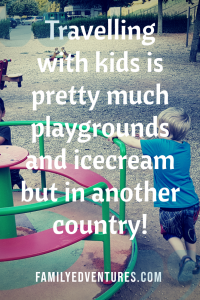 Wow, I just realised how sad I sound 🙂


The kids love the attention!

I think my kids are seriously cute…but I’m a little biased I suppose.

Not a day goes by without a comment about they’re beautiful blonde hair and blue eyes!

I’ve noticed that no-ones mentioned mine…sob…but then it is regularly drenched in lake water so I don’t blame them!

There are so many things that interfere with ‘normal’ life.

At home, I’d wake up perfectly happy only to be put in a pissy mood by the old man nextdoor ranting at me about something depressing or his cat sh#£ing all over my lawn.

Travelling means I have far fewer people interfering with my thoughts. If I want to stress then I’ll decide what about…and it’ll be something that matters to me!

The boys seem calmer too. We’ve had far fewer tantrums and tears. I think they like the slower pace, the sunshine and seeing new things.

Have you noticed any other unexpected benefits to being in another country?

I’d love to hear them…